The new year is upon us at last, which means the time for the fifth and final DLC character on the Super Smash Bros Ultimate fighter pass to be announced has arrived.

If you read my first article concerning Ultimate, you’ll know that I have mixed feelings towards the DLC fighters. While I can appreciate that it’s necessary to make characters you are paying for worth the cost, I find them to be some of the more annoying and overpowered combatants to play against.

Despite my aversion to the current DLC characters, however, I can’t help but get caught up in the speculation/wish list craze that infects all smash players whenever announcement time draws near.

It’s important to note that the following characters are merely my personal favorites – most if not all are assuredly pipe dreams (what can I say, I’m a romantic). Regardless of their respective probabilities, here are my most wanted Super Smash Bros Ultimate DLC characters.

1. The Knight from Hollow Knight

Anyone who has played Hollow Knight will understand why the Knight would make for a perfect addition to the Smash roster.

Now before I get torn apart by the anti-swordie movement, the Knight would not be another Fire Emblem clone, just as how Shulk or Robin is not. Small, agile, and powerful, I’m imagining the Knight would have a weight and playstyle similar to Meta Knight.

For the Knight’s game-specific mechanic, he could have a SOUL meter similar to that of Cloud’s, except the Knight would only be able to charge it by giving or receiving damage. With this SOUL, the Knight could access powerful spells hailing from his home game (I’m thinking Abyss Shriek, Descending Dark, and Shade Soul).

Along with the Knight would come a stage and music from Hollow Knight, infusing smash with a desirable dose of eerie beauty. I envision smash players falling as much in love with the Knight as they do with the setting and soundtrack that accompany him.

As of right now, Super Smash Bros Ultimate only has two swordmages (Robin and Hero) hence why I think another one would help to round out the “swordie” category.

2. Dragapult from Pokémon Sword and Shield

While it’s true that the first fighter pass is supposedly going to consist of all characters not yet represented in smash (and has been so far), it’s hard not to fantasize about a new Pokémon addition with a Pokémon Direct taking place this Thursday.

As for which Pokémon to include, my vote goes for Dragapult. Ghost/Dragon is not a typing one in the Pokémon world sees very often (the only other one being Giratina), making Dragapult a hot commodity. One Google images search yields hundreds of pieces of fan art regarding this pseudo-legendary, attesting to the mon’s wealth of admirers.

Playstyle-wise, I picture Dragapult playing somewhat like Mewtwo. Floaty and light with a tail to boot (with a much improved tail hurtbox if we’re lucky), Dragapult could have a strong offstage game and decent power to offset her squishy nature.

With a new Pokémon come new Pokémon music, a stage, and potentially a plethora of Gen. 8 mons added to the Poké ball spawn pool. For those of you who have played Pokémon Sword and Shield, you’ll understand my excitement about getting the gym leader, Bede, and Oleana battle tracks along with a Galar stadium stage. 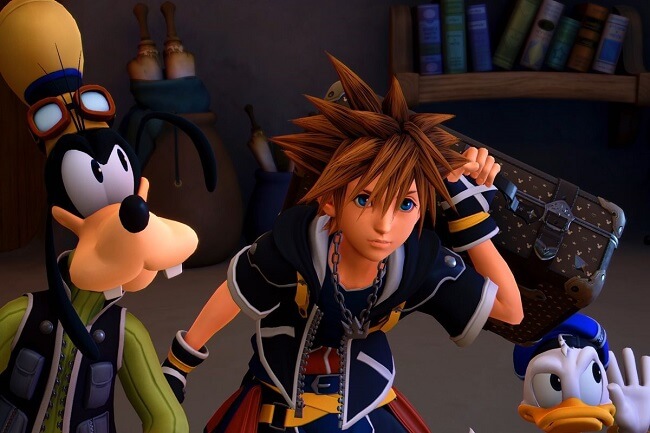 Remember what I was saying about the lack of swordmages in smash? Sora from Kingdom Hearts would be the Hero that doesn’t run on RNG (thus making him much more likable in my opinion).

Unlike most of the other characters in this article, Sora has been a fairly frequently requested character since the beginning of this fighter pass. Well-known to both Western and Eastern gamers alike, Sora is a name that I could easily see making it into smash at some point or another; so why not now?

With his surplus of unique keyblades and magical abilities, I foresee Sora surpassing the Hero in terms of both use and potential. Whereas Hero relies upon random crits and spells to compliment his rather weak moveset, Sora would have dedicated spells linked to a keyblade.

These keybades would function much like Shulk’s Monado Arts: Sora could cycle through them and pick one according to the situation at hand. By allowing Sora to control his playstyle vice relying on randomness, he could easily see a high play and success rate.

Despite being a swordie with a similar concept to an already existing DLC character, Sora would no doubt be a welcomed addition to the smash crew.

4. Ori from Ori and the Blind Forest

Akin to the Knight from Hollow Knight, Ori is another popular indie character that I would love to see make it into Super Smash Bros Ultimate.

Ori would undoubtedly make for one of the more interesting additions due to their relationship with a sphere of light known as Sein. In Ori and the Blind Forest, this will-o’-the-wisp hovers near Ori and protects them using spirit flame attacks.

I imagine Ori having the weight and size of a character like Pichu, while playing much like Rosaline and Luma (where players simultaneously control both Ori and Sein). This tag team operation would offer creative gamers ample opportunities to pull off unique and exciting combos inaccessible to other characters.

And since Ori and Sein would be on the smaller, lighter side, they would be best as a combo-heavy glass cannon-type fighter. However, unlike Pichu, Ori could possibly be a slight zoner with Sein backing them up.

Furthermore, the art style and musical direction in Ori and The Blind Forest are breathtaking, meaning that a stage and soundtrack stemming from this character will be a crowd-pleaser regardless of a player’s familiarity with the game.

Perhaps the most iconic character on this list, Master Chief is also possibly the least likely to make it into a game like smash. However, with Snake even being a thing at all, there is definitely still hope.

Because he is in a futuristic suit of armor, I’d imagine Master Chief would have a weight similar to that of Samus. His playstyle, on the other hand, would be a mix of Mega Man and Snake.

I don’t believe that ranged-only characters ever fit very well into the flow of fighting games, so I’d hope that – like Snake and Mega Man – Master Chief would be given some decent melee moves. Still, his bread and butter should be ranged attacks.

Master Chief’s unique mechanic could be his ability to swap between several different weapons, like a gravity hammer, battle rifle, and sniper rifle. Each one could have distinct advantages and disadvantages to allow for strategic utilization as well as counter play.

Plus, think of all of the incredible stage and music options. A stage based on a Halo ring with the warthog run melody playing in the background? Shut up and take my money.

What Dreams May Come

The chances of any one of these fighters claiming the last spot on this fighter pass may be slim, but there is a bright side; Sakurai has already confirmed that there will be additional fighters released for Super Smash Bros Ultimate after this initial fighter pass. So even if none of these snag the final spot in this fighter pass, who’s to say they won’t appear in future bundles?

I suppose all that’s left to do is to wait for those magical days when each new DLC character is unveiled to the world. Until then, I’ll see you all on battlefield.

This list is by no means all-encompassing – who are the characters you most want to see in smash? Leave a comment below!