Borderlands 3 has just recently passed the three-month mark, a milestone that brings with it the first of four DLC planned in the Borderlands 3 DLC roadmap: Moxxi’s Heist of the Handsome Jackpot. As with previous installments in the Borderlands franchise, a new DLC means more story, more playable locations, and of course, more loot.

If you’re anything like me, you’ve already beaten the game at least several times over and are now focused on farming ad infinitum for the perfect anointed legendaries. The infusion of fresh content into a game where the grind can, at times, become mind-numbing is crucial to retain player interest.

In the past, Gearbox has introduced some extremely good DLC – The Zombie Island of Dr. Ned, Mr. Torgue’s Campaign of Carnage, Tiny Tina’s Assault on Dragon Keep, and Claptastic Voyage (to name a few). However, they have also, unfortunately, missed the mark on occasion cough Sir Hammerlock’s Big Game Hunt cough.

After achieving 100% completion of this first Borderlands 3 DLC, I can safely say it is much more of a hit than a miss and definitely worth picking up if you haven’t already done so.

I’d like to be clear on this point in particular: the story is good in Borderlands 3 standards, but it can’t hold a candle to the plot and writing of the aforementioned DLCs in earlier Borderlands games.

Don’t get me wrong; there are some funny and memorable side quests as well as a few notable characters sprinkled throughout the DLC. There’s even a segment of the main quest where you’re teleported to various locations as a heist crew member explains each step of the plan – a classic movie trope that works wonderfully.

Keep your eye out for a side quest called “Heart of Gold”; it is hands-down my favorite side quest in the entire game so far.

Aside from these, though, the story is pretty average. The occasional good joke here and there, some yelling from Mr. Torgue…all standard Borderlands 3 goodness.

Overall, do not go into this DLC with your expectations set at Bunkers & Badasses level. You will be disappointed. 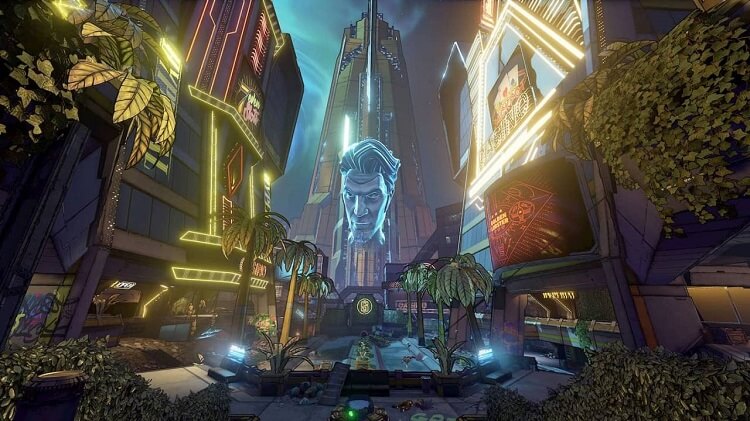 The concept of a rundown space station casino filled to the brim with Handsome Jack busts, Hyperion loader bots, and money-grubbing bandits is as awesome as it sounds.

While my character glided towards the ominous station in the Sanctuary III, I was immediately reminded of Isaac Clarke in Dead Space. That thought alone was able to conjure goosebumps on my arms (if you’ve played Dead Space you’ll know what I mean).

Once inside, the Handsome Jack holograms, ECHOs left by previous visitors, and the dilapidated slot machines and crumbling infrastructure are all highly reminiscent of Rapture from Bioshock.

I admit that these comparisons may seem embellished, but I believe the Handsome Jackpot is deserving of the association.

If anything, I wish Gearbox took advantage of this great setting more. For instance, I would have loved to see a side quest featuring spooky supernatural activity, perhaps from Handsome Jack’s ghost (similar to the ghost side quest in Borderlands: The Pre-Sequel).

Pipe dream aside, the Handsome Jackpot casino is without a doubt one of the coolest locations Borderlands 3 now has to offer.

Let’s be honest – story and setting are fine and all, but it’s the loot that keeps everyone coming back for more. And there is loot. Oh, is there loot.

Since Gearbox has taken a hiatus from nerfing/buffing legendaries for at least a little while, the meta weapons and armor have become fairly well-established. Maggie, Cutsman, Crossroads, Night Hawkins, Transformer, Re-Charger… these perform admirably no matter the character or circumstance.

This new DLC has introduced at least a handful of gear that will no doubt be added to this ever-expanding list. The Lucky 7, ION CANNON, ION LASER, Scoville, Slow Hand, Rico, St4ckbot, and Seein’ Dead are all incredibly useful and in some cases (ION CANNON) downright busted.

Not to mention the DLC bosses are mostly without gimmicks and can be farmed repeatedly with little to no trouble; faster farm = more loot.

One interesting loot factoid to note: the boss that drops the ION CANNON seems to drop it close to 100% of the time. Whether this was intended or not is still up for debate, but I for one hope that Gearbox retains and expands this trend to the rest of the game.

It’s already hard enough to get the legendary you want, let alone the right element, stat rolls, and anointment to go with it. By increasing the drop rate of the loot, the grind becomes much more manageable and much less demoralizing. 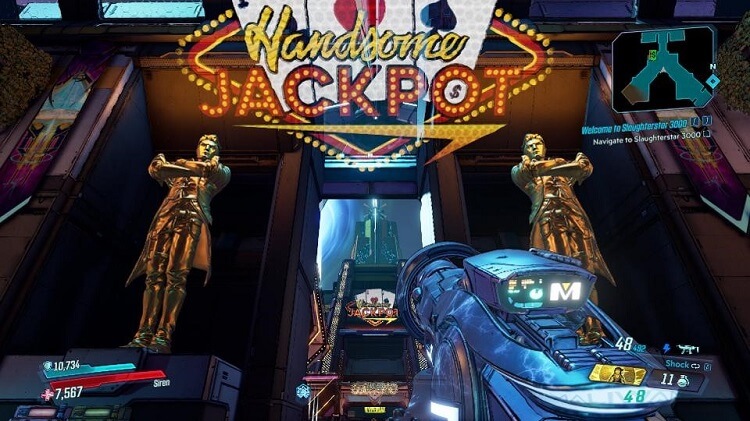 Taking into consideration the story, setting, and loot of Moxxi’s Heist of the Handsome Jackpot, you would be foolish not to give it a try. While it is true that there are no new playable Borderlands 3 DLC characters or level cap increases, the content that is there is more than enough.

Even though the writing is still not on par with that of prior Borderlands entries, the side quests are as enjoyable as ever and there are several interesting NPCs. Plus any lack of story is made up for by the noteworthy setting of the Handsome Jackpot itself.

Furthermore, this DLC has the potential to dethrone Graveward as the favorite farming spot with its high-tier loot and seemingly improved dedicated drop rates.

Whether you’ve been playing Borderlands 3 since release, you’ve just received it as a holiday gift, or you haven’t touched the game in a month, this DLC is absolutely worth the $15.

If you’ve already played the DLC, what’d you think? Leave a comment below!