No more reckless clicks. Get your head in Econia – the latest free to play business simulator

Have you been waiting for an opportunity to test your management skills by competing with other people right from your mobile phone? There is a gaming world where real business decisions are made.

Econia – which is already available on App Store and Play Market – promises to become a brand new experience that no previous tycoon, idle and city builder games can provide you with.

You start with naming your business and giving it an appealing corporate colour and logo. A quick tutorial from your virtual assistant will help navigate through the number of actions available in the game. At the very beginning there is some in-game money on your balance and just a small piece of land with a few buildings that you’re going to expand.

Those who used to enjoy PC versions will love the fact that the city is crafted with a full 3D graphics so players can easily spin and zoom. As you play, little cars are cruising the nearby streets and funny people are coming and going while there is an imitation of city noise making you get in deeper.

The game is not without classical elements of idle city builders, such as the familiar routine of waiting and upgrading. Placing various types of buildings requires different amounts of time, and the bigger and the more expensive your choice is, the longer you will see the timer ticking down. Sometimes too long to be distracted by other game tasks, but too short to go and do your things. Although the development team offers you to reduce the waiting period by watching a little advertisement, with complex buildings you’ll have to do it several times in a row. Anyway, remember where you keep your patience hat and get ready to put it on periodically. 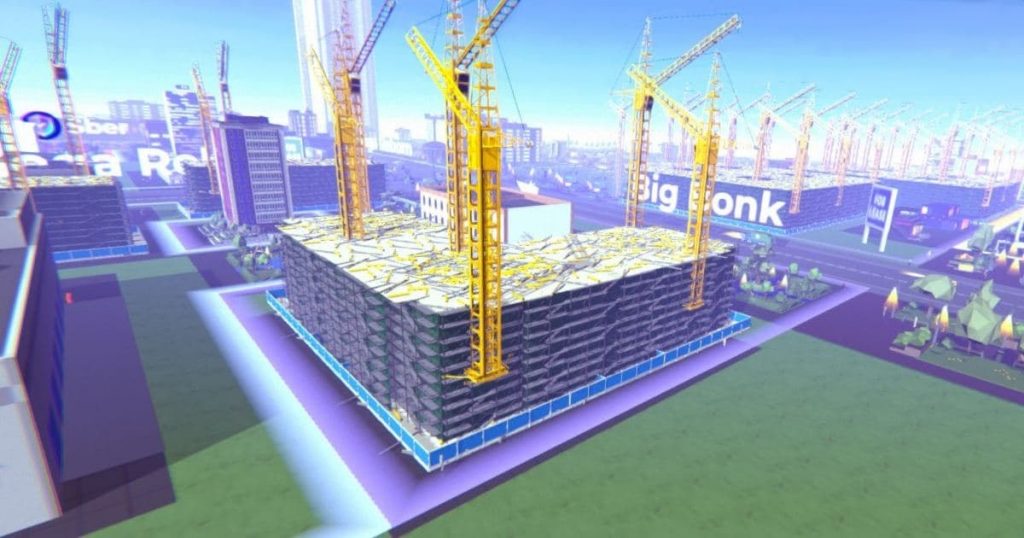 Once a building is placed, you can’t rotate it or move to the more suitable location, which gives the impression of a shallow simulation. So think carefully before deciding on the correct position. The only possible option is to demolish the building in case it seems to turn into negative business and then rebuild it from the scratch.

But the matter becomes more complicated when you have 13 more players competing with you on one map and a single mistake can cost you everything. The old tiresome micromanagement is taking a new form, depending on how you decide to interact with others – cooperate, conquer or concentrate on growing your own empire without any expansive moves.

Every type of building has its own strong and weak points, that’s why you need to create solid alliances in order to solve existing problems and increase the productivity of your workers. Your own business ecosystem will enable you to do it for free, while choosing an enterprise that belongs to another player will cost you some money. The good options are marked with a green thumb up and the bad ones are marked with a red thumb down.

You’ll get all the information about your building right after you long press it and see the respective bar in the lower portion of the screen. But with most actions in the game made with just one quick click, it may feel like in this aspect the interface is a bit inconvenient.

As the game expands to level 3, you will be able to let other folks use your land for making business. Each piece of street that comes to be within your possession as you keep playing has a limited area marked “for lease”. All you have to do is set the cost of renting and wait for buyers. If you wish to borrow someone’s land, you can spin across the neighbourhood in search of existing options, choose a lessee that suits your needs and send the request. But be careful because the land owner can easily break the rental contract or demolish your building in the lease area. You know, business is business.

The game will seduce you into playing on the dark side. There are the plots of land that are common to everyone, enforcing all 14 businessmen to act fast and occupy them first. But it is only starting to be fun. The most vengeful players who are late may pursue their vendetta against more prompt competitors by making raid attacks of buildings in disputed territories.

Once you see the target icon above these buildings which you should tap to capture the alien business. The number of such attempts depends on how well the streets of your opponent are protected. You compete with two more people for obtaining the building, and in case the owner fails to defend it after the last attempt is made, the player who has the most successful raid attacks wins the fight.

However, if the person whose business is in danger is you, react quickly to repulse hostile takeovers, protect your workers and enhance the security of your streets by placing more buildings with “Law and Order” perks.

Criminal abuses don’t end here – at the level 11 local mafia wakes up and offers you to rob your neighbours. For 10.000 Econs they will gather intel and figure out what players have a sufficient balance of minimum 100.000 Econs to become your perfect victim.

Then you pay the same amount of money to commit a robbery and what’s next? The fortune wheel appears in front of your eyes making your success a matter of luck! Well, at least you can check whether Don Random favours the bad guys and if it does, you share your prey with racketeers. One goal can be attacked as long as you have money for it and your victim owns over the same 100.000 Econs.

Except for upgrading the security of your savings, don’t hesitate to open a bank account and make a deposit of minimum 100.000 Econs and maximum 500.000 Econs. This feature will be available at level 9 and will hide some part of your funds from mafia for a certain time – from 24 hours to a couple of weeks. It also helps you get more money just like it happens in the real world. Right after your deposit has expired, you go to the bank and instantly take your money back together with interest that depends on the chosen deposit period. It’s important to know that you can’t make several deposits simultaneously.

The most fascinating thing about the concept of Econia is that every detail – from the number of dwellers and rental prices to the competitors’ behaviour – matters. The unreasonable approach focused on doing everything you want doesn’t work. You have to be smart, enterprising and determined no difference what playstyle and strategy you want to adhere to.

This is exactly where the simulation acquires its depth – there’s no chance to let events take their own course. Keep in mind that broadening your influence means more attention and investment, which automatically increases the possibility of failure.

The specific nature of MMOs does its part as well and deprives you of being in full control of what’s going on. You can’t be online 24/7 and watch, as actually all people at least need to sleep. But while you’re meeting your basic needs, another player will break your mutual alliance or stop buying your goods, and the flourishing enterprise will suffer serious loss. Not to mention dishonest lessees, feisty raiders and ubiquitous mafia. The situation may change within seconds, and if you don’t demonstrate your business sense in time, you’ll go bankrupt. They say, if you decided to start your own business, say goodbye to sleep.

A pleasant thing is that you’re offered to get extra money for completing daily tasks related to expanding and optimizing your business as well as creating strong ties with other players. But it’s always up to you – whether you develop as a legitimate businessman or act like a bold aggressor willing to sandbag everybody around.

Being the first ever mobile city builder combined with MMO, strategy and tycoon genres, Econia is definitely not another time sink game. The complex closed virtual economy representing the real-world prototype enforces you to go nuts every time you start playing. And fighting with real people for authority, new territories and businesses excites your competitive spirit. No any pre-set game scenarios, just your decisions and subsequent repercussions.

So, if you’re a fan of more ordinary idle games who plays in order to have a rest without hurting your brain, Econia is an ill-suited option, which you will remove from your phone faster than you can say Jack Robinson. The game is designed for thoughtful people.

Now the development team starts beta-testing PC version of the game that is planned to see the light of the day in six months.

Minecraft’s Biggest Achievement on YouTube and How It Is Being Celebrated!

5 Tips to Become a Game Developer

Best Esports Tournaments of All Time