When Halo Infinite Releases, This is What I’d Like to See

After eight long months of waiting, Halo: The Master Chief Collection has finally welcomed Halo: Reach into the family.

Unsurprisingly, it has captured my full attention and sucked me back into the Halo universe (Reach was revolutionary when it initially came out).

Having already spent a few days immersed in Halo (seriously, try out Reach if you haven’t already), the subject of Halo Infinite has once again popped into my head.

So far, very little has been announced about the game. We know it’s still following Master Chief and his exploits succeeding the events of Halo 5: Guardians…and that’s about it.

As the flagship game of the upcoming Project Scarlett console, though, the secrecy surrounding Halo Infinite is understandable.

Such a laughable amount of information to go off of just begs for speculation and guesswork, which I’d like to take one step further.

Since I’m a dreamer, let’s not discuss what the game might have and instead converse about what it should have when it releases next holiday season.

This one is pretty self-explanatory, right?

The Halo 5: Guardians campaign contained 15 missions, with each one putting you in control of either Spartan Locke’s Team Osiris or Spartan 117’s Blue Team.

Out of those 15 missions, you play as Spartan Locke and his team for 12 of them. This leaves 3 missions reserved for Master Chief and his squad.

Three missions. You play as Master Chief, the main character of the Halo series; the poster child; the living legend; the demon; for 20% of a MAJOR Halo title.

This…was disconcerting to put it lightly, and not just for me. Fans all over the world outraged at the flagrant absence of John-117 during the majority of the story.

Part of me understands what 343 Studios was going for. It reminds me a lot of what Bungie did with the Halo 2 campaign.
In Halo 2, the story 1) establishes a new main character (Thel ‘Vadam aka the Arbiter) and 2) portrays both sides of the Human-Covenant conflict.

In a similar fashion, Halo 5: Guardians presented Jameson Locke and shifted between the perspectives of him and John-117, both of who are caught up in Cortana’s single-minded quest to protect humanity from themselves.

Halo 5: Guardians even has the exact same number of missions as Halo 2; coincidence? Well, okay, maybe (since one of these missions is tutorial/cinematic).

Despite these similarities, there are two major differences I notice right off the bat:

Imagine, a game featuring the MAIN character in a majority of the missions – practically unheard of.

Not only that, the missions that didn’t involve John-117 were still amazing thanks to the dynamic and complex character that was Thel ‘Vadam.

But no, 343 Studios stuck us with a one-dimensional new age Spartan that we had to slog through 80% of the campaign with.

If this next entry is to be successful, it needs to focus on Master Chief. I love his character development in this forerunner trilogy so far (for real, well done 343) but it was tarnished by his absenteeism in Halo 5: Guardians.

The story should focus on John-117 and his struggle with Cortana, the character that quite literally makes him who he is. Not some random ONI assassin with some baby genetic modifications. 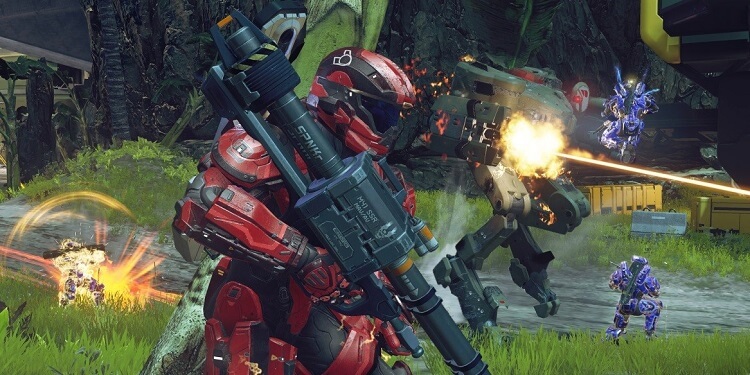 Aside from the legendary story and rich lore, Halo has always been a shining example of how to make a successful multiplayer game.

Whether it be casual or competitive, there is a game type out there for every player. Want to flex your FPS prowess? Hop into some ranked Slayer. Want to mess around with some buddies? Queue into Action Sack and enjoy the mayhem.

These are classic game modes to be sure, but there is yet an even more iconic game type – one that captures the very essence of Halo.

There is nothing so satisfying as seeing two teams of eight players each swarming the map and charging the other’s base, rocket salvos and banshee bombs careening in every direction.

Big Team Battle has everything that makes Halo a tremendous multiplayer experience: intuitive ground and air vehicles, a plethora of weapon pickups, team-based objectives, well-designed maps, and of course a surplus of tea-bagging opportunities.

This is not to say that other game modes don’t contain these features. It’s just that Big Team Battle accentuates these strengths by allowing so many more players on the map than say, slayer (which is only 4v4).

It’s this element of chaos that truly gives Big Team Battle the edge over other game types, but I want more.

Take the newly-released Call of Duty: Modern Warfare, for instance. For the first time in the history of the series, the game features a mode (Ground War) which allows 64 players – two teams of 32 – to compete.

Compared to Ground War, Big Team Battle starts to lose some of its lusters.

Now let’s get one thing straight: I’m not calling for Halo to become more like Call of Duty. If anything, I want Halo to strive for more separation.

However, ever since flying around in a Falcon during Halo: Reach I have dreamt of the day that Big Team Battle expanded to become truly massive in scale.

Imagine – pelicans as controllable vehicles, able to carry 10 actual players around a map the size of a campaign mission area. Ground assaults conducted with squadrons of Warthog Scouts and Scorpion Tanks. Wraith bombardments painting the sky a blue plasma as they ark ceaselessly back and forth.

Halo Infinite will be releasing as the game for Project Scarlett, a new gen console which, according to Microsoft, will be four times as powerful as the current Xbox One X.

343 Studios need to take advantage of this vast increase in processing power and capability. What better way than making a Big Team Battle with four times as many players? 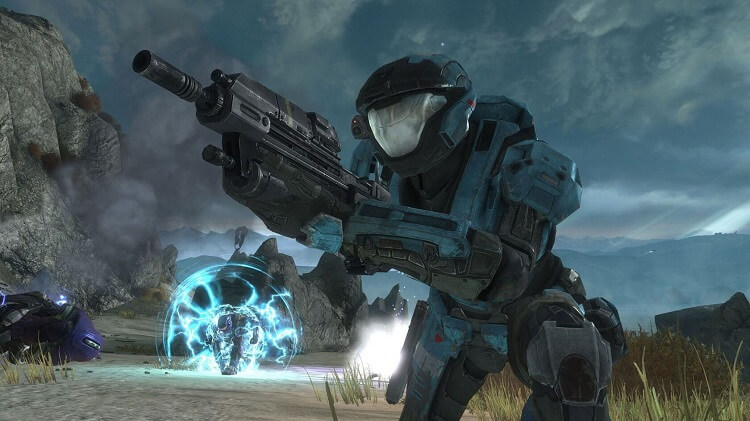 Prepare yourselves for what could be considered two possibly controversial opinions: I actually enjoyed and miss the abilities in Halo: Reach and the usable items in Halo 3.

I loved tossing out a hologram every five seconds to bamboozle my enemies and the jetpack made maps such as Sword Base so much easier to traverse. I even had fun with the active camouflage and the radar scrambling feature.

Likewise, it was entertaining to blind an entire team with the flare or strip their shields almost instantaneously with the power drain. And let’s not forget about the bubble shield, a defensive item that could turn the tides of an unfavorable fight.

I don’t completely understand why 343 Studios removed these features in their continuation of the Halo universe.

While it’s true that they added in the sprint mechanic, no other armor ability or deployable item was as lucky. Whether it was a popularity issue or a story/lore concern I’ll never know.

What I do know is that Halo 4 and Halo 5: Guardians lost something special when they discarded them.

I don’t think it’s too outrageous to ask for a few to make a return in Halo Infinite. No armor lock obviously (that’s burning in the underworld for good reason), but I wouldn’t mind bubble shield, hologram, active camouflage, etc. coming back.

Combat in Halo games has always been exciting and unique. Bringing back these abilities and items would only help further this distinctive gameplay (and c’mon, the hologram bamboozles/Mirage memes need to happen).

While on the topic of features that have been in previous games, I thought Halo 5: Guardians introduced a few noteworthy additions that warrant their inclusion in Halo Infinite.

These are namely the thruster pack, the hover ability while aiming down your sights, and clamber.

For those of you who have played Halo 5: Guardians, I think you can guess why I’ve excluded Spartan charge and ground pound, but I’ll give you my reasoning regardless.

They were cheesy, case and point.

I was already a bit wary when Halo: Reach introduced sprinting but since it was just a movement option I didn’t mind (plus the increased mobility was a pleasant change).

However, when Halo 5: Guardians decided to tack a damage option onto it that had GPS-strength tracking and the knockback of a freight train, I was ready to go back Halo 3 where sprinting was a CoD-only feature.

This is not to say that sprinting should go. On the contrary, I believe sprinting “modernized” the Halo series. No, what needs to go is Spartan charge.

In the case of ground pound, I thought it was a fun feature that was given way too much power. If 343 Studios nerfed it to have a smaller insta-kill radius, I’d be happy.

As it stands right now, though, a player with the literal jump on you can easily ground pound you into the respawn screen with very little effort. Either it needs to be changed or it needs to be removed, simple as that.

The three abilities, then, that should carry over – clamber, hover, and thrust pack – added an additional layer to the already multifaceted Halo experience and made combat genuinely more fun.

These are great examples of mechanics that are easy to learn but difficult to master. Any n00b can panic-thruster to save their life during a gunfight or clamber up any old ledge to reach a sniper spot.

However, movements like these can become predictable and thus punishable. It is then up to the player to come up with creative ways to incorporate them into their gameplay.

Since these are just things I’d like to see in 343 Studios’ highly anticipated conclusion to the Forerunner trilogy, it’s likely that none of these make it into the final game.

343 Studios has the opportunity to make a huge splash in the gaming world; I’d hate to see valued former mechanics be left out.

Nonetheless, I will be keeping my eyes and ears open for any news regarding Halo Infinite (some gameplay is really what I want to see).

As it stands right now, anything can happen. The possibilities are, well, infinite.

Did I miss anything? Leave a comment below on what you think should be in Halo Infinite!