Logitech G303 is a successor of G302 Daedalus Prime which aims at the gaming community with a simpler yet powerful design. It comes up with a compact design that focuses on enhanced accuracy by using the Delta Zero sensor.

I read somewhere that life of a gamer is incomplete without a nice mechanical gaming keyboard, a gaming mouse and a gaming headset. And I think it is pretty much true. The newer generation of games comes with a challenging gaming environment that demands the up-gradation of gaming hardware.

Traditional mice and keyboards aren’t performing very well in this scenario. So it is the need of the hour to come up with better alternatives and hardware manufacturers aren’t oblivious. Several companies such as Razer, SteelSeries, etc. have introduced their models in this regard. However, their mice are too much expensive for an average gamer.

That’s basically the very basic purpose of Logitech. Logitech is a new boy in the town as compared to other competitors but it is doing very well by introducing economical and quality products.

Furthermore, Logitech is focusing on gaming hardware such as Logitech G413 and now we have Logitech G303. Budgeted gamers are their preference but still, they have flagship models too. 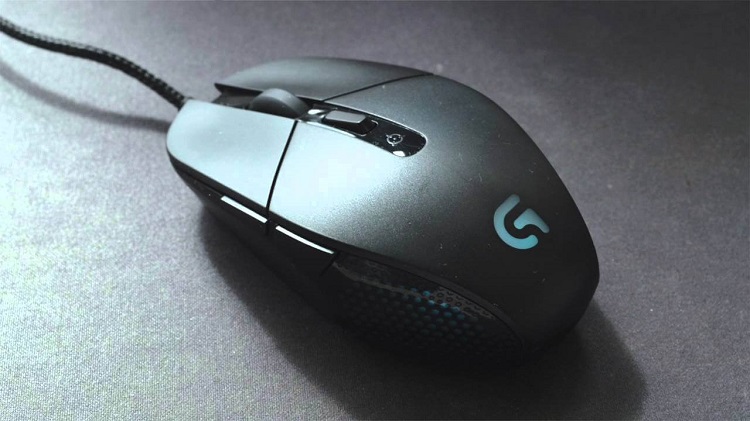 I will take a few of your seconds by undergoing a quick specs detail.

Hardcore gamers prefer wireless mice but this one is a corded one despite being its claim as “best gaming mice”. Previously, Ouroboros and Spatha both had a wired and wireless version, giving you the choice to choose the one which suits you the best. Well, this one isn’t offering any such thing.

So let’s have a look at the design.

It really doesn’t have a gaming look at all. Well for obvious reason, we can’t say that without checking its performance but looks are something that is a matter of attention nowadays. We have left and right clicks, divided by the scroll wheel.

For the first time, I have seen a gaming mouse without RGB lighting at the scroll wheel. Logitech has placed lightings on the back and on two sides. Mouse’s surface is plain and has a Logitech logo at the end which is enlightened. This model is really small and thin and has a good palm grip. All three modes of griping such as palm gripping, finger gripping and claw gripping work here which is very nice indeed.

Black color looks very beautiful especially when all RGB lights are working. Gamers have an obsession with lights and Logitech knows that. Yellow color gives a fantastic view. In front of the wheel, we have a slot for the USB cable. Remember, this is a wired mouse.

Just below the wheel, we have a DPI button. DPI stands for dots per inch and its function is to adjust the speed of the pointer. You can increase it from 200 DPI to 12000 DPI and vice versa. Theoretically, this is very high value because even Razer’s gaming mouse is limited to 8200 DPI. Furthermore, most games can be played at their best below 3500 DPI. But still, 12000 is a good number.

On the left, we have two buttons which makes it somewhat useless for lefties. Spatha had the same problem because all the buttons were on the left side which makes left-handed gamers harder to access them.

I appreciate the symmetric and balanced design but still there remains room for improvement. Below these buttons, we have vent holes that act as a way to let light RGB lights pass through them. You can also find some holes on the right but unfortunately, there are no buttons.

So that’s basically the overview of this mouse. As a gaming mouse, it comes packed with plenty of features which need your applause. G303 use advance optical sensor for surface tracking. They have their own tracking technology named “Delta Zero Sensor Technology” which helps translation of hand movement into precise pointing. This makes this mouse a very sensitive device which is a plus point.

As explained above, G303 breaks the traditional barrier of 8000 DPI with its own version of 12000 DPI. Most games do not go above 3000 and it is not needed either. But still, a very good margin to go with. Other than that, we have a polling rate of 1000 Hz.

That’s exactly the half as SteelSeries Rival 700’s wired version had. But still, its above-average as you won’t be needing more than 500 Hz and gives a very good performance.

Weight is another factor that is the most desired one. I have come across many rivals but they were very heavy to play first-person shooting games effectively. But thankfully, this one is lightweight and Logitech has put the best of its efforts to keep the design minimal.
There is a total of 6 programmable buttons that can be customized to create profiles and assign special commands. Another appreciation of this design is the non-using of edges and points. They are a huge hindrance to smooth gameplay.

Customization is an important part of gameplay and it can’t be done without software. You have to download compatible software to this mouse from Logitech’s website. Using this software, you can do multiple functions such as controlling RGB lights, creating personalized profiles and assigning commands to buttons.

Finally, the RGB lights work very fine. You can select any color among a vast library of 16 million. They are very sharp and look fantastic. 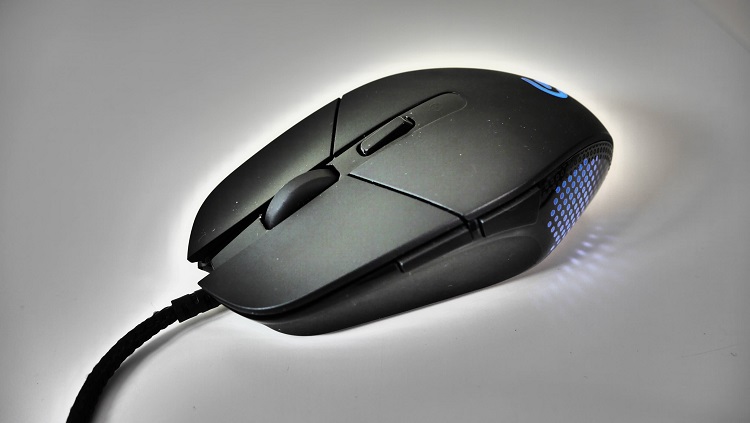 Now we need to decide whether this one is good for gaming or not? Being lightweight is of no use if you can’t have an enhanced gaming experience. I have tested this mouse playing League of Legends and Titanfall.

Thanks to a precise optical sensor, it performed very well. Other than that, switching DPI was very easy thanks to the correctly placed button. There aren’t many buttons so you won’t be getting yourself fooled about the correct buttons. But lack of buttons can also be a problem especially when you are having your hands on some hardcore titles.

So what do you think about this device as a gamer? For me, it’s not an ideal one but still comes with plenty of features that give you brilliant gameplay. There are some flaws but they are part of every story. What are your thoughts about this one? Drop it in the comments section below!