If you are reading this and have not yet played The Outer Worlds by Obsidian Entertainment, do it now. Seriously.

Between the engaging story, lovable characters, and fluid combat, you will be hard-pressed to find a better sci-fi RPG that isn’t more than five years old. I literally just finished playing through the campaign on normal difficulty (spent upwards of 30 hours doing so) and I couldn’t start a new playthrough on supernova difficulty fast enough.

Because The Outer Worlds gameplay is, well, out of this world (sorry), I think it’s only fair that Obsidian strongly considers turning this game into a series. Whether that be a sequel or a prequel, I don’t really care (since either one would be amazing), but ending this remarkable, fascinating universe here would be a terrible mistake.

In case Obsidian isn’t convinced by the overwhelming amount of praise The Outer Worlds has garnered thus far, I will use this article to pile on yet more acclaim. As such, here are four reasons why The Outer Worlds deserves–nay, needs –to have another installment: 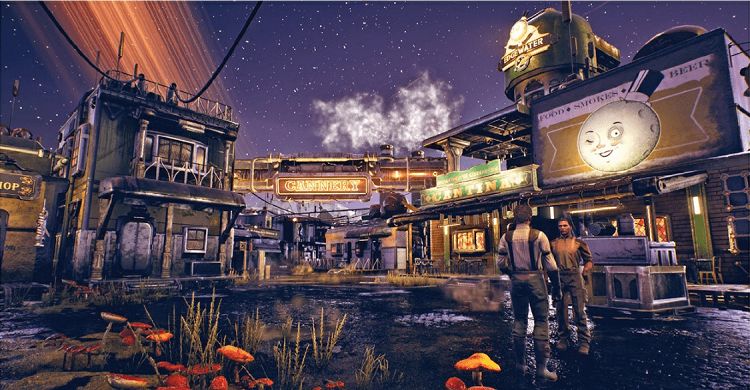 Whether it be in the form of NPCs, computer terminals, or collectibles, lore can be found in every nook and cranny of the Halcyon colonies.

As you’re solving a murder mystery, you overhear a group of apartment tenants discussing the intricacies of Tossball (think lacrosse mixed with death arena). Or, while sneaking through a marauder-infested ship back bay, you hack into a computer terminal detailing the best way to make hallucinogenic mushrooms.

These may be small and subtle instances, sure, but they are crucial when asking a player to immerse themselves in a fictional setting. It is this kind of material that forms the foundation of any fantastical world and gives it power and believability.

And, since The Outer Worlds has such a plethora of corporations at work in the colonies, opportunities for additional lore and background information are nigh inexhaustible.

One thing I’d like to see added to the next chapter of the series would be books of some kind. Now when I say books, I mean the kind of short stories you can find throughout the Elder Scrolls games.

These add yet another layer to an already multifaceted gaming universe, and I think a few books written by Halcyon’s finest authors would not be a waste of time.
The nice thing about creating a universe from scratch is the ability to expand; I would really like to see how far Obsidian can take it. 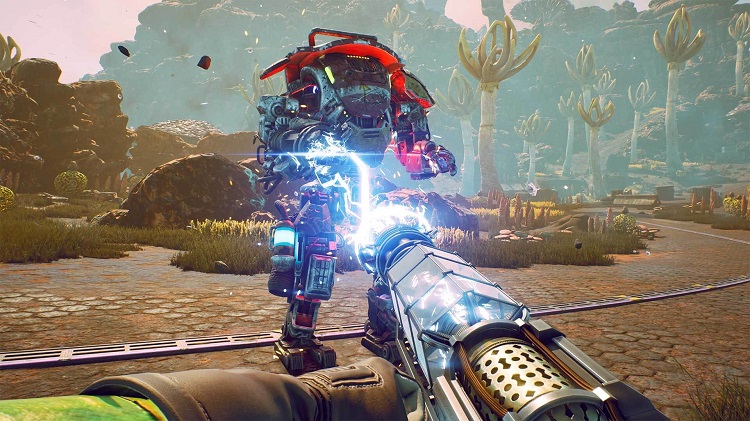 Let’s face it: RPGs are not exactly known for their stellar first-person shooter (FPS) mechanics. If you have ever played any of the Fallout games, you’d know that taking down an enemy using V.A.T.S or even melee attacks was your best bet.

Seeing as how Obsidian developed Fallout: New Vegas, I had my reservations about the combat. In the case of The Outer Worlds gameplay and gunplay, however, different rules apply.

Your character feels right at home with a multitude of weapons, swapping seamlessly between snipers, assault rifles, shotguns, and more. Unlike many FPS/TPS RPGs (cough…Fallout…cough), The Outer Worlds combat plays out almost as smoothly as any AAA shooter. That is, if a AAA shooter had a gun that shrank your enemies to a quarter of their original size.

In addition to wacky science weapons like the shrink ray which help to keep combat interesting, your character also has the ability to slow down time.
This tactical time dilation (TTD) is without a doubt the best part of combat.

Whereas V.A.T.S feels detached and mechanical, TTD draws you into the situation at hand and rewards precise aiming with hilarious effects. Wanna see a grown man grab his nether regions while taking more damage from your party? TTD has you covered.

Speaking of drawing you into the situation, your companions play a significant role in conflicts through the use of their companion abilities, which zoom your camera in on the crew member upon activation.

Each crew member has a combat-specific skill which can disorient or impair your enemies, and each one is deadly. Utilizing these moves in conjunction with your normal fighting routine can turn a tough fight into a clean sweep (this pun was brought to you by SAM).

With such a fundamentally strong and gratifying combat system in place, another game in the series wouldn’t need to reinvent the wheel. It could simply add new types of weapons and companion abilities, different science guns, etc., and it would still be just as crisp and satisfying to play.

Some of the best stories are those that we can choose for ourselves, which is why The Outer Worlds is so engaging to play.

Obsidian gives you total control over both the fate of your character and the galaxy. Not unlike many RPGs, you awake a clean slate. How you proceed is completely up to you.

Do you believe that the Board is managing the colonies properly? Side with the corporations and whip those citizens into shape.

Think that the space conglomerates are ruining the colonist’s livelihood with absurd rules and torturous paperwork? Side with Phineas and fight back.

Don’t give a sprat’s behind about anything and just want to zoom around sowing chaos? The galaxy is your saltuna.

While it is true that major decisions typically come down to choosing one side over another, each choice has consequences that feel impactful. What appears to be the “right” decision could end up causing more harm than good.

Furthermore, it is this dichotomy which allows for starkly different subsequent playthroughs. By introducing multiple branching choices, The Outer Worlds makes it impossible to experience the complete game even after two full runs.

However, players will eventually see everything The Outer Worlds has to offer. It is a fact of life for game developers. No matter how much content you pour into a game, there will ultimately come a point when nothing new or mysterious remains.

By creating a sequel or prequel, Obsidian can continue the series while simultaneously rejuvenating the player base engagement. Downloadable content (DLC) serves this function to a degree, but nothing compares to a fresh new entry.

And trust me, there’s no need to worry about the quality of that next story.

Many developers are unable to craft a story worth playing a single time. Obsidian has made one that is impossible to play just once. 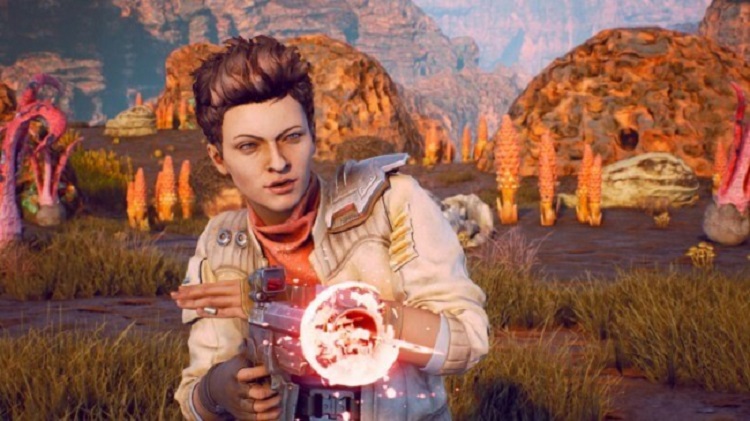 This. This is the best part about the game, period.

I think the last time I was this invested in my NPC companions was back in 2007 while playing Mass Effect.

To be honest, many games do not have companions, and the ones that do use the term very loosely. Typically, a “companion” is a braindead mule relegated to carrying the stuff your character doesn’t have room for (I’m looking at you Lydia).

Or, if the “companions” end up being self-sufficient in combat, their character development and their engagement with your character is lackluster/non-existent.

The Outer Worlds, thankfully, does the term “companion” justice. The crew of your ship becomes like family to you, albeit family that can fry mantisaurs with plasma and break marauder spines with a giant pulse hammer.

Normally I don’t bother with companions. I tend to find that they clash with my playstyle and the benefits they offer aren’t worth the trouble of including them. However, from the moment it was possible, I strutted the streets of the colonies with two companions by my side. They became as essential to my gameplay as my own character was.

Each character in the crew has a distinctly unique set of morals, personality traits, and world views. Taking them with you into the world allows them to contribute to any and all conversations you engage in, revealing complexities you didn’t know existed and lore you couldn’t learn otherwise.

And, were Obsidian to improve the already lethal capabilities of companions, spec’ing into the leadership skill tree could reward players with an even stronger build than currently available.

With a new installment in the series, a whole slew of new characters could be added as possible companions. This would open up new side missions, new companion missions, new lore…heck, Obsidian could even bring back previous crew members and hit gamers right in the nostalgia.

The bottom line is this: 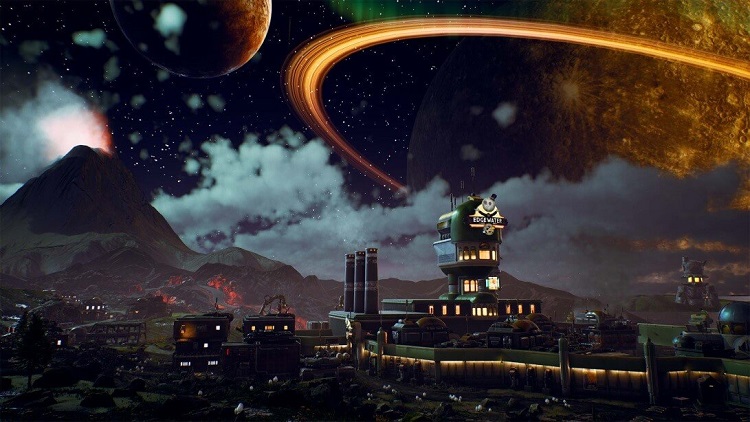 The universe of The Outer Worlds is much too great to end here. Regardless of how many DLCs are planned, Obsidian would be foolish to drop this franchise once those have been released.

They should, by all means, create new games (they’ve shown they can handle it), but there should still be a team devoted to making an Outer Worlds progeny.

But don’t just do it for me Obsidian. Do it for everyone who has fallen in love with the Bioshock meets Fallout meets Mass Effect craziness that is The Outer Worlds.

Similar to the colonists left drifting on the Hope, there are a lot of us.